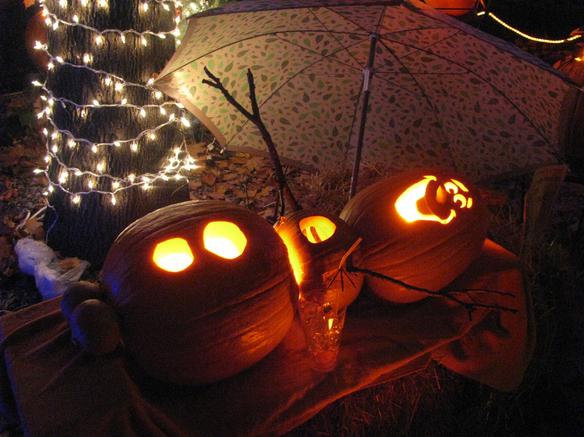 Halloween has always been a very special holiday for my family.  My Grandmother was born on Halloween so growing up it was always Trick or Treating followed by cake and ice cream!  I remember taking the triangle eyes and square nose pumpkins I carved over to my Grandmother's house on Halloween night for our entire family to see!
Over the years I would carve more and more pumpkins, but it was discovering the "Pumpkin Master Carving Kits" in the late 1980's that really allowed me to expand my carving.  I always tell people I am not an artist because all I am doing is following the patterns in the kits.  However, it is a great feeling when I see a pumpkin I finished carving and it looks just like the picture on the package!
Our display has grown over time.  It started out very simple - at my parent's house I would put pumpkins in the landscape, in the windows and even on the roof!  People would always comment on how much they liked them so each year we would try and do a little more.  Orange and purple lights were quickly added to trees and bushes and the number of pumpkins on display went over 20!  Word of mouth brought more and more visitors each year.  Being featured in "The Post-Crescent" in 2003 caused E. Harding Dr. to experience its first traffic jam!  TV stations began featuring our display and inviting me to appear and give pumpkin carving tips!  We began putting the pumpkins out for 3 nights instead of only on Halloween and visitor counts soon jumped from being in the hundreds to the thousands!
2006 marked the very first year we began accepting donations from people who came to see the pumpkins.  On our return flight from our honeymoon, my wife Sarah and I flew over New Orleans while the city was still in the midst of Hurricane Katrina.  Sarah suggested taking a donation to help the victims of Katrina.  Our first year's donation was given to Oprah's Angel Network for Hurricane Katrina Relief.  We continued to do donations each year:

In 2019 all donations will again be given to the "Stock The Shelves" program!!!

Finally, the one question lots of people ask is, "Why do you do this?"  Admittedly, it is a lot of work for myself, my wife and my parents (the display is still held at their house)!  However, it is a great feeling watching so many people get so much enjoyment over looking at pumpkins!  Young and old all enjoy them!  No one is waiting to scare you and everyone is welcome to take as many pictures as they want.  For a few days a year I can "be a kid again" and do something I thoroughly enjoy.  The fact that we are helping people by collecting a donation is the icing on the cake!

We hope everyone has a fun and safe Halloween!
Kevin and Sarah Rades